My own journey as a mamá started in Los Angeles in 2007 when I gave birth to a vivacious little girl we named Camila.

I was a late bloomer as a mother and as a wife because I spent many of my adult years working as a TV producer with the likes of Univision, MTV Latino América and mun2 and getting that fast-paced career bug out of the way.

Born in Houston, Texas to Salvadoran parents, I grew up in El Salvador and often traveled back to the United States, ultimately attending the University of Florida. It is in the U.S. that I established myself as a television and entertainment producer and content creator. Being fully bilingual and completely bicultural, opened up many doors for me both in the U.S. and later in Mexico when I decided to move to that magical country that still feels like my second casa and where I met and wed my husband.

We ended up in Los Angeles when a job opportunity opened up for both myself and my husband in this city we now call home. Little did we know it would be in the multicultural city of angels where we would give birth to our girl and where we would end up sembrando raices.

My journey as a mamá is what also gave birth to SpanglishBaby.com when in 2008 Roxana and I tried from a distance to navigate the journey of motherhood together and found a huge void in the Latina mom blogging space. We were specifically looking for resources to help us find books in Spanish for our niñas, and even just stories of motherhood that bicultural Latina moms could identify with. We also selfishly wanted to learn more about how to raise our daughters to be fully bilingual and knew it wasn’t as easy at it seemed. So, we gathered all our experience as producers and content creators, used our daughter’s nap times to learn all about the ins and outs of blogging and social media, enlisted a couple of bona fide experts to give the “real” advice, and on February 9, 2009 launched SpanglishBaby.com

Thanks to SpanglishBaby and the community that rose around it that believes in what we believe in, I finally feel I’ve found my passion in life. We truly created a movement of parents raising bilingual and bicultural kids

This passion for social media and the community of Latina bloggers, led in 2010 to the creation of Latina Bloggers Connect, the first  boutique agency to bring together professional Latina bloggers and brands seeking to reach the growing Hispanic population in the United States. I’ve always been a connector by nature, so my role as founder and CEO of LBC is another way I feel fulfilled and where I can make a difference.

But never, ever did I imagine I would add the word “Author” to my title. Thanks to Bilingual Readers and  the book we  launched in September 2012 — “Bilingual is Better: Two Latina Moms on How the Bilingual Parenting Revolution is Changing the Face of America” — I can now proudly say I am an one.

I also loved joining the team at BermanBraun as an Editorial Consultant for the launch of latinamom.me in 2013, the US Hispanic channel on mom.me. Designed to appeal to the modern Latina mom, latinamom.me offers content in a mix of English and Spanish, and in a voice that’s de mamá a mamá.

I can truly say these last years have been proof that hard work, a clear vision and commitment can make anything possible. Having no money (launched two blogs in the middle of a recession!), no time and no support are not excuses, they are motivators.

But what I’m truly the most proud of…mi Camila. She’s my motivation, my drive, my inspiration and even my moments of insanity. ¡Esto es por y para tí, Bebé!

You can also read more of my random thoughts over at my Babble Voices blog — Besos.

Check out the amazing campaigns and articles featuring the best of the Latina bloggers’ world over at Latina Bloggers Connect.

Read my even-more-serious bio at my Amazon Author’s Central page.

And, yes, BUY THE BOOK!! (The press tour and launch party for the book was fab!)

Looking for the accolades, press, my work as a lifestyle spokesperson and ambassador and all that? Here are some of my favorite highlights:

Featured on Sheryl Sandberg’s Lean In

In 2013, La Opinion (the largest Spanish-language paper in Los Angeles) recognized me as one of 30 “Mujeres Destacadas” in a live ceremony.

Serve as a board member of The Hispanic Entertainment & Technology Board at Digital Hollywood.

Quoted on the New York Times on an article titled “On Book-Tour Circuit, Sotomayor Sees a New Niche For a Justice”

Featured on USA Today as one of “6 Latino Bloggers to Watch.”

One of four bloggers featured on the first-ever Netflix Families site.

Appeared on the cover of Hispanic Business Magazine’s 2010 Special Media Report for the article titled: “The New Face of Social Media” 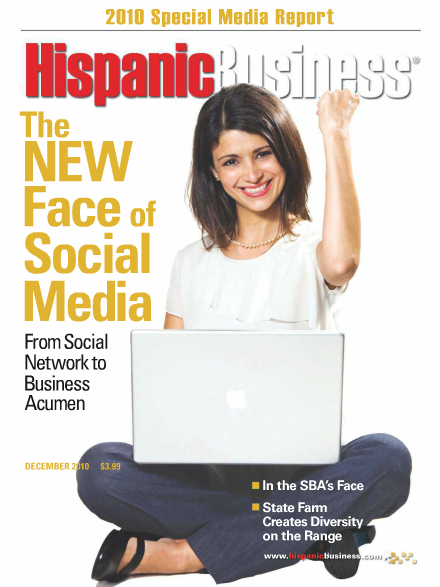 Partner for LATISM’s Top Bloguera Retreat in Washington D.C. and helped organize our visit to the White House.

Visit NBCNews.com for breaking news, world news, and news about the economy

I also get inspired at:
Babble
latinamom.me